How to stop inline skate for INTERMEDIATE LEVEL

Skating off pavement onto grass. You can weave from pavement to grass and back to pavement to control your speed, especially when going downhill. To stop completely just stay on the grass.

Beginners are often intimidated by this procedure, but it is really a very simple physical feat. The hard part, if any, is simply understanding mentally what it is you are trying to do, as I explained.

This is a lot of fun, too. I like to hit the grass full speed, and then skate as far down a slope as possible before the grass stops me. 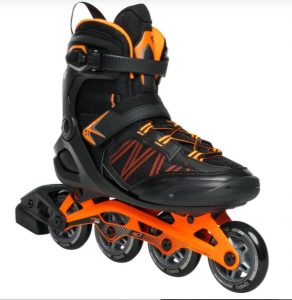 One important requirement is that the ground should be dry. Wet dirt or grass will clog your wheels and your skates will also sink into mud (yuck).

This is where you skate into a spin to transfer your linear momentum into angular momentum. To do this, you sort of stop-n-hold one skate at an angle to act as the pivot foot and the other traces a circle around it (and you). It may help to think of having each skate trace concentric circles, with the pivot skate tracing the much smaller inner one. The pivot skate will be turning on its outside edge, while the outer skate will be on its inside edge.

A spinout with your skates in a bent spread eagle position (i.e., heels pointed towards each other, skates at slightly less than 180 degrees). There is no pivot foot here, instead both your skates trace the arc.

A sustained outside spread eagle is more of an artistic skating move than a practical stop, although I use it occasionally to stop on flat surfaces.

NOTE that all types of spinouts require a fair amount of room. Your forward motion is quite suddenly changed to angular motion so I’d recommend this mainly for low traffic areas where you won’t have people running into you from behind when you do the spinout.

This stop works both forwards and backwards at higher speeds. I call this the crossover stop because your feet are held in the position of a spread-out crossover. In this stop, you’re going to be arcing to one side. The harder and sharper you turn, the faster you stop. If you tend to trip on your skates, spread your skates farther apart (forwards-backwards).

There is also the inverted crossover stop where your feet positions are reversed: so you turn left with your left foot forward and right foot back (and vice versa for right turns). Watch ice hockey players just after play has stopped. More often than not, the circle around in the inverted crossover position.

Both crossover stops are good for high speed stops but make sure you have plenty of open space. 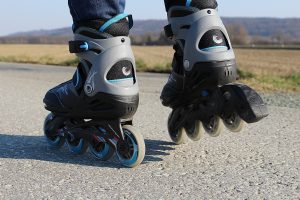 For skiers, this maps over very nicely. This is more of a speed control technique rather than a stop, but it’s very useful to know. Explaining slalom turns can take an entire book in itself, so I will merely suggest that you find a skier or a ski book to show you how.

One way to practice this is to find a nice gentle slope with plenty of space at the bottom, set up cones in a line, and weave through the cones.

Wind-braking is more for speed-control than outright stopping (although on windy days, wind-braking can stop you). Just stand up, spread your arms out and catch the air like a sail. You’ll probably need to lean forwards slightly, to counter the force of the wind.

This entry was posted in Blog. Bookmark the <a href="http://mkircher.com/how-to-stop-inline-skate-for-intermediate-level/" title="Permalink to How to stop inline skate for INTERMEDIATE LEVEL" rel="bookmark">permalink</a>.